Mancora is a chilled out surfers paradise where travellers often end up staying months at a time however our arrival was less than chilled out. Our bus driver thought he was Fernando Alonso and thanks to the empty roads at night and a swift border crossing he beat his personal best, getting us into Mancora at the delightful time of 3.30am with no room booked till the following evening.  Luckily  the hostel let us crash on their sofas until the morning, but not so luckily people in the hostel were on a big one celebrating Halloween til 7am – weird considering we had left Halloween celebrations 7 hours earlier in Cuenca. By this point we gave up on any more shut eye and headed for the beach- unsurprisingly we had the beach to ourselves which was pretty lush.

Before we knew it three days had passed and we had barely moved a muscle- a well needed rest. We did break from the horizontal position once or twice- we had a few beer fuelled nights, ate some great grub with beautiful views, swam and most extraneous of all- rented out  stand up paddle boards with two guys we had met in our hostel. It was great fun, although pretty tiring as the sea was nowhere near as flat as we were initially led to believe by the view from the beach.

If we weren’t at the beach we were to be found at the hostels pool, although it small it did have a little swim up bar so you didn’t even have to leave the water. To add to the hostels attractions it had two great dogs and tiny kittens who loved attention as well as our scrambled eggs in the morning.

After a less eventful night bus we rocked into Huanchaco at a rather more acceptable time. We found a hostel and then headed out for a wander and a chill on the beach. The town is similar to Mancora, and many surfers still loose themselves here but it doesn’t quite have the same vibe. Despite not being quite as charismatic fisherman in the village still use a very traditional method of fishing- on boats shaped like cigars (Caballito de Totora)- which is rather cute. 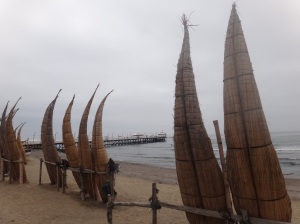 The next day was a tad overcast so we decided to play the tourist and go check out the Chimu ruins of Chan Chan- Northern Peru’s most important archaeological site, dating back to AD1300. This site once formed the largest pre-columbian city in the Americas and the largest adobe city in the world. The area it covers is absolutely massive- stretching as far as the eye can see- although only a small part has been excavated so most looks like little more than rubble. The small part we saw was pretty impressive- the walls are decorated with complex patterns of fish, birds and netting and once stood over 10m tall. You can see a tomb where a Chimu King was buried along with his most prized possessions- not to mention the 40+ people they sacrificed when he died, concubines and all. There was also a sunken pond in the middle filled with huge reeds and birds nesting that use to be used for sacrifices. 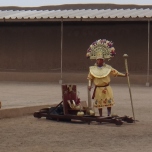 2 responses to “Beach bumming in Mancora and Huanchaco”