The next stop was Lima and once again the views on the bus ride (8 hours) were incredible. They changed drastically on the way, from snowcapped mountains to arid desert and amazing coastline. We arrived in Lima with pretty low expectations- the majority of people we had chatted to had said they hated it. Luckily we were pleasantly surprised. Lima is a huge city- Peru’s capital- and isn’t known for being the safest place so a lot of people think its pretty hard work. But our experience was slightly different.  We got in early evening so went for a wander and some dinner around the square of Miraflores (the area we were staying) with Kristie one of the Ozzies we had met on the trek in Huaraz who happened to get on the same bus as us to Lima. We think this must be a pretty affluent area, it had a picturesque square with some great looking restaurants, which meant that it felt very safe- although unfortunately also meant we were priced out of the restaurants and ended up eating fast food Chinese. It was good though.

The next day we went to central Lima to the Plaza de Armas and some other squares. As per usual Mike and I lucked out. We arrived just in the nick of time to see the changing of the guards. As with everything in South America this has a little more spice to it than in the UK- they practically did a little dance. It involved almost half an hour of gun throwing, twirling (Zoolander style- they couldn’t turn left) and parading.  We also saw a weird animal parade/show which we are pretty sure was an attempt to promote better environmental attitudes- something that many S.Americans are seriously lacking- but again we are not sure because of the language barrier and the abstract nature of the performance.

The only place we decided was worth the entry fee (Lima’s bloody expensive) was the Monesterio de San Francisco. This is one of the best preserved cathedrals in the city but is also famous for its catacombs and library. It was Lima’s first public cemetery, with an estimated 70,000 burials and the bone filled crypts can still be seen today- eerie. The library is also rather impressive with books dating back to the Spanish Conquest.

In one square there is also a rather amusing statue- a mistake was made by a stonemason who misinterpreted the double meaning of the word Llama and placed an animal Llama on top of the Saints head instead of a crown of flames- bad day at work!

We also proved to be quite a tourist attraction ourselves. Peruvian tourists were ‘discreetly’ taking pictures of us all day- in fact a group of young girls plucked up the courage and asked us for a photo with them- somewhat embarrassing as at first we thought they wanted us to take theirs.

In the afternoon we went for a stroll along the beach front by our hostel. We discovered a great shopping area set into the cliff side high above the rocky beach below which was also filled with a number of swanky restaurants and bars.  We decided to splash out (in traveller’s terms) and grab a seat at one of the bars to share an ice cream and a Pisco Sour. We had been meaning to try one of these for a while now, it’s a local concoction made out of Pisco (National spirit derived from grape), lemon and whisked egg whites…potent but delicious…We sat on the terrace under blankets whilst watching the sunset over the pacific – great way to round off our brief time in this great city. 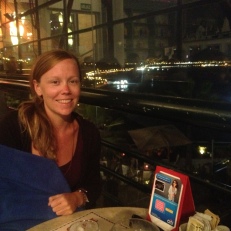 Huacachina is the polar opposite to bustling Lima. It’s an oasis town with only 200 permanent residents but is one of the most beautiful and unique places we have ever visited. Surrounded by mountainous sand dunes that roll into town over the picturesque lagoon it’s no surprise that this setting has made it on to the back of Peru’s S/50 bank note. We arrived here after a fairly short bus ride with Kristie again and spent the first day wandering around the tiny town (takes no more than 5 minutes) and playing on the sand dunes. In the evening we went for dinner and some drinks in our hostel’s restaurant with Kristie and a group of girls that we had bumped into several times on our trip previously. 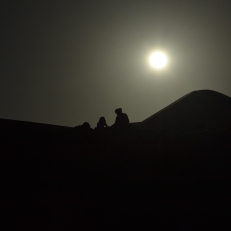 The next day we chilled out by the lagoon in the morning- the weather was seriously amazing. We then had a lunch of tortilla chips with the best guacamole ever before our adventure filled afternoon – dune buggies and sand boarding. We jumped on a beast of a machine and minutes later we were blasting across the desert flying over the dunes. Our driver would come to a slow stop at the crest of some of the bigger dunes before plummeting down the other side, just like a roller coaster does before the big drop. We jumped out of the buggy at numerous spots to take photos and try our hand at sand boarding. After some brief attempts at standing up we soon realised it was easier and a lot faster to simply use the board as a sledge and go down on our bellies. We used our legs as rudders to help steer our way down the dunes which led to our guide repeatedly shouting ‘open your legs’ although we did happen to notice he said this more to the girls… 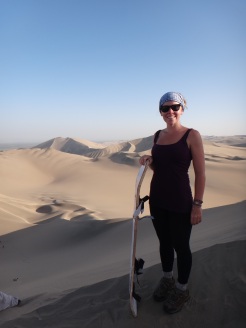 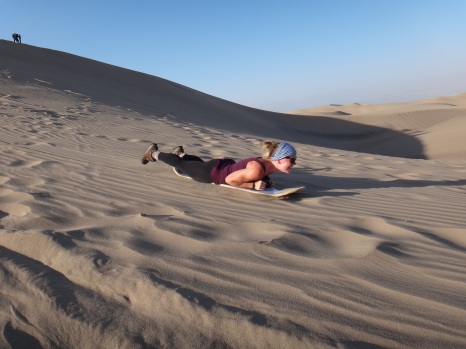 For dinner Grace tried to be more adventurous with exploring the local dishes (Mike couldn’t look past the pesto pasta) and ordered chicken made with Carob tree syrup- a very sweet sauce not dissimilar to a dark treacle or syrup- not sure we will be ordering it again but it was an experience.

One response to “Polar Opposites – Lima and Huacachina”