Finally! After a week of waiting we got to pick up our camper. It was worth the wait. Thankfully for Mike the design on our van is more butch than the one advertised on the website, with a graffitied toad, as opposed to a pink picture of Janis Joplin. I probably would have preferred Janis but love the camper none the less. The team at Wicked (the company we used for rental) were great and helped us plan our route south. Then, just as we were about to leave Wicked’s office, they pointed out the writing on the back of the camper which, translated, says “honk if you like the toad”. They explained that the word for toad has a double meaning- ladies bits. This can make it hard for me to sleep on the road while Mike drives but does have the advantage that we can be blissfully ignorant to any negatives honks for bad driving. We call him toady for ease.

Having the camper has been ace so far. The amount of freedom it allows compared to what would otherwise be endless bus journeys completely changes the travelling experience. Also, giving how easy it is to wild camp (camping for free without a designated site), we can stop on the road where ever takes our fancy and so are not constrained to the Gringo trail. This means we have taken our meal stops, washed and slept at some of the most amazing places, including next to rivers, lakes and the base of snow-capped volcanos. Sometimes spots can be hard to find because ideally you want to be far from busy roads, tucked away off the beaten track but the spots we have been finding are definitely worth the effort. It has been amazing cooking and cleaning near the water and sitting out with a bottle of vino or rum in the evening watching the sunset or the stars. And the best thing- we have only paid for two nights so far! 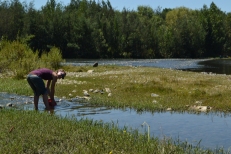 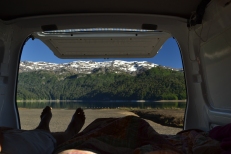 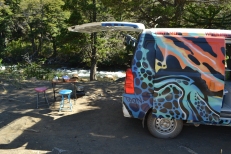 The few downside’s. The first morning we got woken up in the early hours to a group of drunken teens that had made it out to the coast and were playing music and dancing round the van (we left that spot with out even getting out of the van to get into the car seats). In one lush spot by a river (wandering piggys and all) a man tried having us on and tried charging us for our spot which was clearly public land but we moved on just in case he caused us any trouble. Finally wanting a wee in the morning can be a pain in the bum as it can be quite chilly and it maybe a little walk away before you find enough privacy (although this seems to be getting less and less of a concern).

Our first spot was a seaside town called Pichilemu. This area has a cool suffers vibe and a beautiful coast line. We were lucky enough to fall upon a very popular area to watch the sunset while searching for somewhere to stay the night. The sunset was lush and it was great being by the sea as it had been a while. There was also some great music playing as some very inebriated holidaying Chileans had set up DJ decks and were having a boogie. 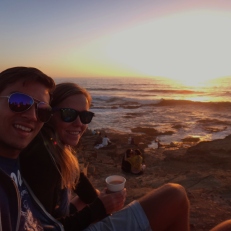 We then hit the Lake District. The Lake District falls in both Chile and Argentina and is inundated with, to state the obvious, glorious lakes, as well as volcanos, mountains and rivers. On the Chilean side we decided kayaking in Conguillio National Park and, a trip highlight, climbing Villarica were the must do’s.

Conguillo National Park is best known for being home to the endangered monkey puzzle trees. As you enter this amazing park via an extremely bumpy road you can see these trees for miles. You also pass a sign informing you on the threat level within the volcanic danger zone and advising evacuation routes, scary! Luckily when we arrived the threat was medium to low so we carried on as normal. The volcanic area consists of one very impressive snow-capped, cone shaped peak surrounded by dried lava flows that look like rivers. The glacial lake fed by the run off from this volcano is also worth a mention. The water was so clear you could see fish and fallen trees deep below. The stillness of the lake also led to mirror like reflections of the snow-capped mountains being cast. We decided to explore it in a kayak (we had a quick swim but as expected it was pretty chilly) and went all the way to a huge waterfall dropping down from 100ft above. 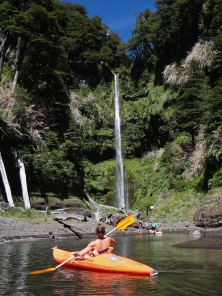 We gave climbing the volcano in Conguillio a miss saving ourselves for Villarrica. This volcano can be accessed from the bustling town of Pucon which is situated on the side of the huge and beautiful Villarrica Lake – making it a worthy place to stop. 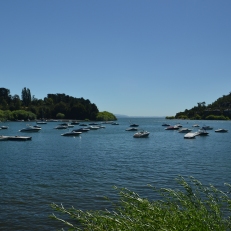 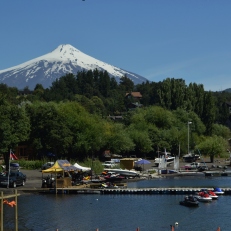 Our tour picked us up at the ungodly hour of 6am and drove us to the base of the volcano. Here our group decided to take the easy option, a chairlift which cuts about an hour off your ascent, a good decision we thought. At the top the hard work started. First we got kitted out for our chilly climb, ice picks and all. We were lucky with the weather; it was a nice sunny day making the snow soft enough that cramp ons were not required. We were then given a demonstration of how to self-rescue if we slip on the snow and start to slide uncontrollably down the steep slopes. This involved rolling over onto our stomach and holding the ice pick in a good position for it to dig in. For the next 4 hours or so it was just a case of putting one foot in front of the other, slowly making our way through the snow.

The views at the top made it all worthwhile. The glistening blue waters of Villarrica lake and the surrounding volcanos were epic and looking down at where we started gave us a huge sense of achievement. We congratulated ourselves with our slightly sweaty packed lunches and a short break. Next we checked out the inside of the crater, a deep hole over 100 metres down leading straight to the magma chamber. The stench of sulphur was almost unbearable; it was so strong it burnt our eyes and lungs.

Then came the fun part. We took the express option, skipped the four hour walk back down and jumped on bum boards instead. Similar to tobogganing, we zoomed down the sheer mountain face in ready-made tracks that took us all the way back to the top of the chairlift. By far the most enjoyable part of the day, we couldn’t stop laughing the whole way down.

Another border crossing and another Argentinian stamp. This one was incredible however – we traversed over the Andes passing by the foothills of dormant volcanoes, glacial lakes and rapid filled rivers. A drive to remember, destination Bariloche.

Similar to Pucon, Bariloche is another tourist hotspot town located on a stunning lake (no wonder they call this region the Lake District). However, it does have a bit more to offer than Pucon – the area is famous for its chocolate shops (of which we sampled many), a lush square and a beautiful church. We also went for a rather chilly dip in the lake. Bariloche’s best attractions lie outside of town, Cerro Campanario and Cerro Catederal included. The summit of Cerro Campanario offers up what National Geographic has recently labelled ‘one of the top 10 views on this planet’. With crystal clear lakes, dense woodland and looming mountains as far as the eye can see – it’s easy to see why. Cerro Catederal is a quaint ski village and actually one of the best ski destinations in the Andes. Despite being out of season it was still buzzing with activity, keen mountain bikers, hikers and general outdoor enthusiasts descend on the tiny village all year round.

We even found the time to meet up with our Canadian buddies Darren and Ian (we had last seen them on a night out in Santiago). This was meant to be for dinner however after hearing about a mind blowing steak they had eaten the previous night Mike was determined to try it out for himself. The only problem was that the restaurant was closed until 8 at which time Darren and Ian would be sat on a bus heading South. This didn’t stop Mike, who insisted we got a light snack with the boys before saying our goodbyes and making a b-line for the epic steak. He informs me it was one of the best steaks in his life, worth the wait I suppose…